Why Is Evernote Losing Its Ground

Evernote, the grandfather of note-taking apps and the emblem of productivity is losing its ground?

I am taking this opportunity to talk about Evernote but taking a very different perspective altogether.

I am going to pen down my thoughts on the emergence of Evernote into a powerful note-taking app, the challenges they have faced, and the Evernote future.

Just in case, if any of my readers are interested in any of my Evernote tutorials, you may check this out on my YouTube channel here.

Before I get into this, I want to acknowledge that I am a huge fan of Evernote and have been using it for the last 12 years and have 15000+ notes in it. I love and adore this platform.

A quick introduction on Evernote – the grandfather of all productivity apps.

Evernote is an app designed for note-taking, organizing, task management, and archiving. It is developed by the Evernote Corporation, headquartered in Redwood City, California.

The app allows users to create notes, which can be text, drawings, photographs, or saved web content. Notes are stored in notebooks and can be tagged, annotated, edited, searched, given attachments, and exported.

Evernote Journey – there have been peaks and valleys.

Let’s take an account of Evernote Journey and see how this company has evolved over the last few years. 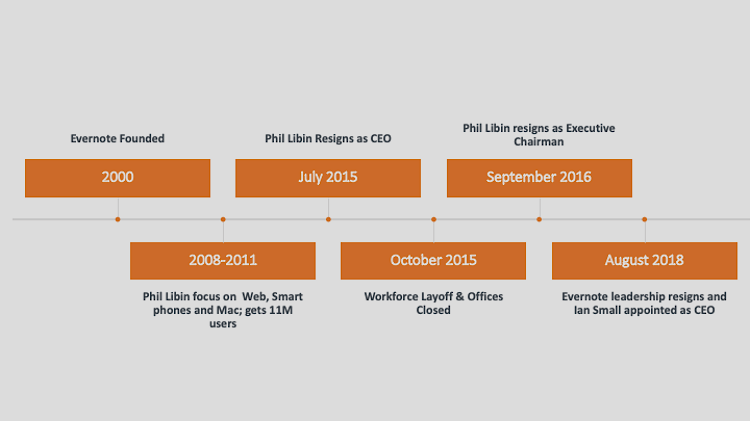 With that said, Ian Small had an enormous task to achieve as well as to repair and build this company. It was not an easy task for him and is still not.

Ian Small talks about his strategic initiatives in this blog. One of the Evernote users suggested coming up with the ‘Behind The Scenes’ video series that will make millions of users abreast with the developments and enhancements they are making.

In case you have missed the Behind The Scenes, check out here!

And, we are in the second half of 2020, Evernote is still working and analyzing the beta testing. Mr. Ian Small, the users are nervous!

Challenges with Evernote Corporation — My Perspective.

The greatest issue Evernote has is product-market fit.

As enormous as Evernote is, they truly do not have a handle on what their clients really need. And whereas a solid freemium procurement technique has gotten them, 225M clients, they’re not taking advantage of that base at all.

As an 11-year-old company, they are already fighting a few strong debt issues, which truly isn’t a great place to be with so many new entrants in this space.

Trying to build a product that pleased everyone led to stagnated development and unfocused features, making it more difficult to compete as new services entered the market.

This means that Evernote is not providing the type of value that customers expect from a note-taking app.

Here are my thoughts on the reasons for Evernote’s popularity decline:

Evernote vs. the Competition.

As a grand-father of all note-taking apps, which really isn’t a good place for Evernote to be with, there are many new competitors entering the market.

Evernote has come up with plenty of improvements on their current capabilities during the beta testing but they are all fixing the issues and nothing new is coming up.

My point is that,

“No one is expecting you to be perfect, but are you constantly striving to be better and innovating with new features and capabilities — This is what matters”

Not only the competition is tough but there is plenty of innovation amongst the new players.

With the emergence of creative note-taking apps that have understood, acquired, and adopted the user pulse in the last few years, Evernote is losing its ground as well as credibility.

As I was writing this article, I need to mention that in the latter part of 2020, Evernote has completely re-vamped its platform on iOS, Mac, and windows, and NOW, I will be recommending this any day.

Finally, if you see the Evernote YouTube channel, you will notice that the videos from Ian Small speak all about fixing the issues since the time he came on board and, that is my point here!

For instance, the topics for his videos are — ‘building a better foundation’, ‘improving the tag experience’, ‘help shape the future of Evernote’, and so on.

That’s all for today!

My preferred note-taking app has been Evernote and will remain the same. With the new face of this great tool, I would strongly recommend, and please feel free to sign-up here – START WITH THE FREE VERSION.